Besides the voyage of 1492, Columbus made three other voyages. On the second, which lasted from September, 1493, to March, 1496, and was undertaken with seventeen ships and fifteen hundred men, including his brother Diego, he discovered Porto Rico and Jamaica; learned that his colony of 1492 at La Navidad had been totally destroyed; and founded in its stead, in Española (Hayti), the ambitious settlement of Isabella. He also visited Cuba and compelled his entire ships' company to make oath that they believed it to be the mainland, the Alpha or beginning of the Indies. 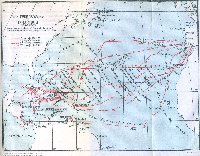 The third voyage of Columbus from January, 1498, to October, 1500, was undertaken with six ships and two hundred men, to test the opinion of King John II of Portugal that to the south there lay a continent; and the opinion was sustained, for the voyage was signalized by the Admiral's greatest achievement next to that of 1492 — the discovery of the mainland of America, at Paria, near the mouths of the Orinoco. Mistaking the land at first for an insular body, he soon came to realize its true character. As early as July, 1498, he wrote: "It is certain that the discovery of this land in this place is as great a miracle as the discovery on the first voyage"; and in August he thus confided to his Journal: "I am convinced that this is the mainland, and very large, of which no knowledge has been had until now." Later, in October, when writing to Ferdinand and Isabella, he said: "I think that if the river mentioned [the Orinoco] does not proceed from the terrestrial paradise, it comes from an immense tract of land in the South, of which no knowledge has been hitherto obtained."

But meanwhile in Española conditions, social, political, and economical, had become chaotic; and in 1500 the Admiral was superseded as Governor by Francisco de Bobadilla, who, stretching his authority, arrested his predecessor, together with his brother Bartholomew and his brother Diego, and sent them to Spain in fetters. Promptly released by the sovereigns, Columbus, after an affecting and (on his part, we may be sure) eloquent scene with Isabella, was released with the promise of a restoration of his privileges as defined in the Capitulation and Letters Patent and was placed, so to speak, on waiting orders.

By 1501 the Admiral had conceived the project of a fourth voyage, to be made with four caravels and one hundred and fifty men; but before setting out, in 1502, he deposited his papers in safe keeping, drafted his will, and wrote to the Bank of St. George in Genoa, offering a tenth of his yearly income for the reduction of food taxes in that commonwealth. This last maritime enterprise was shared by his brother Bartholomew and his son Ferdinand, now a lad of fourteen, and had for its main motive the disclosure of some avenue by which Asía — that part of it where lay the riches — míght be attained. In short, Columbus had now come to realize that thus far he had failed to reach the country of the Great Kaan. He felt that he must have reached Asia, but at a point lying to the south of Cathay and India; and, as for flanking the difficulty by penetrating to the south yet further, an immense tract of land, "a mainland, " interposed. Still, in the interposing mass there must be a narrow place, and through this a strait, for the currents that set westward from Jamaica so indicated. It is to be observed that on this voyage he pretty much ceased to concern himself with Cipangu, so manifestly futile were all attempts to identify it with Espanola.

For a full year Columbus skirted the coast of Central America from Cariari in Nicaragua to the site of Puerto Bello in Panamá, hearing of " pepper " and of people in "rich clothing," of commerce, and of the "river Ganges." In November, 1504, he returned to Spain, where Isabella, his patroness, was at this time on her death-bed, so that his many letters to the Spanish Court remained unacknowledged.